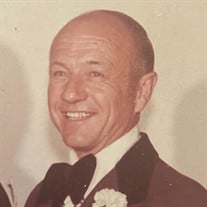 Wallace Wade Acton, 90, of Glencoe, AL passed away on Wednesday March 24, 2021 at his home surrounded by his family as he had always requested. Mr. Acton was born on August 21, 1930 in Sterrett, AL. His Celebration of Life Service will be Saturday, March 27, 2021 at 2:00 at the Gadsden Presbyterian Church on Piedmont Cutoff. Graveside service is scheduled for Saturday, April 3, 2021 at 2:00 p.m. at Woods Presbyterian Church cemetery in Tallapoosa County. Rev. William Perry will officiate. Mr. Acton was an ordained minister with The Cumberland Presbyterian Church at a young age and served many churches over his life long career. Churches served were: McClouds Chapel CP Church, Brooksville, MS; Wingo CP Church, Wingo KY; Lebannon CP Church, Lebannon, TN; Glencoe CP Church, Glencoe, AL: East Gadsden CP Church, Gadsden, AL; Piedmont CP Church, Piedmont, AL; and in Tallapoosa County where he resided many hears he served Sardis Baptist Church, First Presbyterian Church of Dadeville and Woods Presbyterian Church. Mr. Acton was the first director when construction began on The Alabama Sheriffs Girls Ranch in Tallapoosa County. He was there when construction on the first girls home was started and was there through construction of all homes and buildings that were necessary for the running of this large group setting for young girls needing a home situation. He served in this position for several years while also being interim pastor for different churches. Mr. Acton is a long-term member of the Kiwanis Club serving in Tallapoosa County And Etowah County. He loved this organization and worked diligently with activities such as the Pancake Day, Christmas Shopping for Children in need, and the Builder's Club and Picnic and numerous other projects. He has received many awards for his services in 'Club such as an award for 42 years for perfect attendance, he was Lt. Governor of Kiwanis Club for Alabama, 2014 he was President of the Gadsden Kiawani's Club, 2014 he received the George Hixon Fellowship award. He was also President of the Dadeville Kiswani's Club Mr. Acton was also very involved with the Chamber of Commerce and was selected as Citizen of the Year for Dadeville Area Chamber of Commerce. Mr. Acton was a strong supporter of the Republican Party and received numerous awards such as Chairman of Campaign for Etowah County. He physically worked and supported many candidates at all levels of government. Mr. Acton always totally involved himself in whatever community he lived in giving full support in many areas. He was particularly supportive of youth activities both in his church and in the school in the area he lived providing spiritual, emotional and physical support. He was a coach, an umpire, and a football referee. He was always such a hard working man and he truly lived each day to the fullest. He stayed so active and busy up until the age of 87. Everyone who ever knew Wade Acton knew of his love to cook for and feed crowds. Whether it was BBQ, fish fries, or just a lot of hot dog suppers you knew how much he enjoyed doing this. Having lots of people around just enjoying. So if you like hot dogs (as much as he did) please have a hot dog, enjoy it and think about him and how much joy he got out of cooking for people. Mr. Acton was preceded in death by his wife Christene Weldon Acton, parents Rev. Armon and Thelma Acton, Step-mother Ruth Acton, two brothers, Gene and Ty Acton, three nieces and one nephew. He is survived by his wife of 36 years Virgnia G. Acton; four brothers, Rev. Don (Mary) Acton, Knoxville, TN; Rev. Larry (Rose) Acton, Branson, MO; Kenneth (Janiece) Acton, Byrum, MS; Roddy Cahoon, Safford, AL; two sisters Beth Acton, currently of Selma, AL and Ellen (Bobby) Cahoon Smith, Decatur, AL; son Randall (Janet) Acton, Glencoe, AL; daughter Candy (Jeff) Acton, Marietta, GA, two daughters in his heart Cindy Westbrook, Marietta, GA and Aryette Meyer, Holland; five grandchildren: Tara Acton and Laura (Kevin) John, Anchorage, AK; Lance (Jeni) Norris, Lacy (Jeremy) Kasson, and Kyle Norris all of Marietta, GA; six great grandchildren: Maddox, Lexie, Harper, Jack, Avery and Pepper. Mr. Acton also had a son of his heart, Steve Duncan, who was his companion, care giver, driver, handyman, whatever Mr. Acton needed. The family is forever grateful and thankful for the love and care Steve always showed him. And we must also list his little fur buddy Dixie, the little dog that was always by his side. A host of neices and nephews. Special thanks for the loving care provided by Encompass Health Care. Their care and true love and support was priceless for the family.

Wallace Wade Acton, 90, of Glencoe, AL passed away on Wednesday March 24, 2021 at his home surrounded by his family as he had always requested. Mr. Acton was born on August 21, 1930 in Sterrett, AL. His Celebration of Life Service will be... View Obituary & Service Information

The family of Wallace Wade Acton created this Life Tributes page to make it easy to share your memories.

Wallace Wade Acton, 90, of Glencoe, AL passed away on Wednesday...

Send flowers to the Acton family.