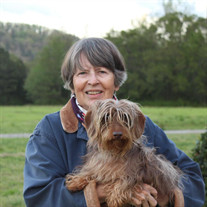 Virginia Edna (Gini) Baxter Stone of Anniston, AL, formerly of Scottsboro, AL passed away at her residence on June 14, 2022, at the age of 82. She was born on March 16, 1940 in Plainfield, New Jersey to the late Arthur Norton Hubbard Baxter & Marguerite Fitts Baxter. She is also preceded in death by her husband of 48 years, Albert Moody Stone; son, David Arthur Stone; brothers, David Arthur Baxter, John Alfred Baxter and grandson, Daniel Lee Marcus Stone. She is survived by her son, Stephen Lipscomb Stone II (Cindy); daughter in law, Lourie Casteel; grandchildren, Dinah-Shae Brooks Stone, Olyvia Casteel Stone, and Harrison David Baxter Stone. Gini graduated from Westminster Choir College in Princeton, NJ and accepted a position as Minister of Music at the 1st United Methodist Church of Scottsboro. She married Moody Stone in 1963 and they raised their two sons on the family farm in Larkinsville, AL. She served several years as a substitute teacher. She later went on to develop the first hospice organization in Jackson County and served as director for several years. She was an active member of St. Luke’s Episcopal Church in Scottsboro for many years, where she was the president of Daughters Of The King, before moving to Anniston, AL in May of 2018. She then started attending St. Luke’s Episcopal Church in Jacksonville, AL. The family would like to recognize Joyce Elston, Marie Ponder, Henry Elston and the staff at Kindred Hospice for the love and care they all did for Gini. A memorial service will be held at St. Luke’s Episcopal Church is Scottsboro located at 402 South Scott Street, Scottsboro, AL 35768 with the Rev. Polly H. Robb officiating. Visitation will be held on June 20, 2022 at 1:00pm at St. Luke’s Episcopal Church with memorial service to follow at 2:00pm. Rudder Funeral Home will be assisting with the service. A brief graveside service will follow memorial service at Cedar Hill Cemetery in Scottsboro, AL.

Virginia Edna (Gini) Baxter Stone of Anniston, AL, formerly of Scottsboro, AL passed away at her residence on June 14, 2022, at the age of 82. She was born on March 16, 1940 in Plainfield, New Jersey to the late Arthur Norton Hubbard Baxter... View Obituary & Service Information

The family of Virginia Edna "Gini" Baxter Stone created this Life Tributes page to make it easy to share your memories.

Send flowers to the Stone family.