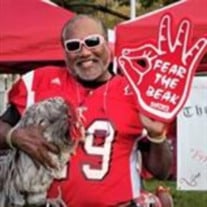 Tommy Pinkard, “Pink”, as he was known to friends, age 66, of Jacksonville, Alabama, passed away on January 31, 2022, at UAB Medical Center – Birmingham, after a brave and brief battle with leukemia. Tommy was born on December 9, 1955, son of the late Doug and Gertrude Pinkard. He was preceded in death by his parents, older brother Junior Pinkard, and by the love of his life Denise Vinyard. Tommy was a graduate of Jacksonville State University, Jacksonville, AL and became a proud member of Omega Psi Phi Fraternity in 1975. Tommy loved Jacksonville and JSU and stayed active in campus life through his business, Pink Photo and Camp Pink. He was well known for his ability to know everyone, be everywhere and take all the pictures. He was employed as a Counselor with the CITY Program for 33 years, providing services to at-risk youth. Following his retirement from the CITY Program, he fulfilled a lifelong goal by enrolling at Auburn University, graduating with a B.S. degree in Women and Gender Studies in 2019. During his time at Auburn, he participated in an exchange program and was a student for a semester in Johannesburg, South Africa. Survivors include his sister Peggy Pinkard Gooden (Anderson); his brother John William Pinkard (Sue Nell); nephews Johnny Pinkard (Jackie), David Pinkard (Sheila), Reginald Pinkard, Tommy Pinkard (Yojana) and Lamar Pinkard, and niece Suzette Pinkard and nephew Davin Pinkard. Also mourning his passing are several great-nieces and nephews and extended family members. In addition, Tommy leaves many good friends, including his lifelong friends Chris Hill, Mark Wright, and Sarah Screven, who treasure his memory and mourn his passing. The family wishes to thank the staff of the Hematology and Oncology Unit HOSU on the 8th floor of UAB and the UAB’s Palliative & Comfort Care Unit who provided Tommy with superior care, kindness, and dignity during his illness. In accordance with his wishes, Tommy will be cremated and there will not be a memorial service. In lieu of flowers and to celebrate Tommy’s life please make contributions to The Tommy Pinkard “Pink” Memorial Scholarship, which was created at Jacksonville State University. Donate by texting GIVEJSU to 91999 or online at www.jsu.edu/givejsu. Questions contact The JSU Foundation at 256-782-5306 Well done, good and faithful servant!

The family of Tommy "Pink" Pinkard created this Life Tributes page to make it easy to share your memories.

Send flowers to the Pinkard family.