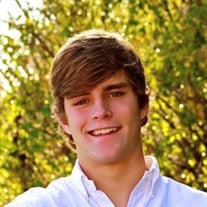 Stuart Chafin Chandler, 25, of Anniston, passed away on April 20th, 2020 peacefully in the comfort of his home. Stuart was born on May 20, 1994, in Fort Lauderdale, Florida to Robert and Katrina Chandler and he entered into rest Monday, April 20, 2020. Stuart was a 2012 graduate of Oxford High School and attended the University of Alabama. Stuart is survived by his mother, Katrina Andrews; his step-father, Scotty Andrews; his siblings, Kristen, Liam, and Kelsey Chandler; his step-brother, Houston Andrews; his grandparents, Doug and Sue Stanfield and Heidi Radke; his uncles and aunts, Todd and Jeanna Chandler, Marty and Kim Radke, and Deedee Henderson; his cousins, Chase and Rian Chandler and Tiffany, Marty, and Brandon Radke. He is preceded in death by his father, Robert Charles Chandler and grandfathers Martin Charles Radke and Scotty Loran Chandler, Sr. Stuart was an active member of Church of the Highlands. He loved the purity of nature, whether it was a hike through Cheaha or looking at the ocean with his feet in the sand, he was always ready for the adventure. He was a witty individual with a magnetic personality. His loving energy knew how to bring joy and kindness through his smile. Those who knew Stuart, even slight, lost a blazing light to there life’s journey. He did not see divisions, he did not see flaws, he only saw you. When people met him they knew he was an authentic friend and those who called him friend knew he was loyal. As a result of his cheerful spirit and outgoing personality, he was loved by many. His innocent kindness and loving smile will be imprinted on all the lives who knew him. The best gift Stuart could give was himself and it was a treasure. Stuarts ashes will be spread at sea in the same coordinates in which his fathers were spread. A celebration of life will be announced at a later date. All are welcome to attend and celebrate Stuart Chandler’s life.

Stuart Chafin Chandler, 25, of Anniston, passed away on April 20th, 2020 peacefully in the comfort of his home. Stuart was born on May 20, 1994, in Fort Lauderdale, Florida to Robert and Katrina Chandler and he entered into rest Monday, April... View Obituary & Service Information

The family of Stuart C Chandler created this Life Tributes page to make it easy to share your memories.

Stuart Chafin Chandler, 25, of Anniston, passed away on April...

Send flowers to the Chandler family.