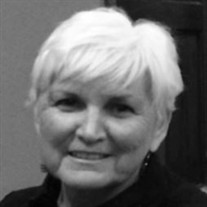 Not sure what to send?

Sandra "Pam" Reaves Storey, 71, was called to her Heavenly home on April 4, 2022 at UAB Hospital in Birmingham, AL. “Pam” as she was so fondly known as was born on May 11, 1950. She grew up in Calhoun County and was a 1969 graduate of White Plains High School where she made many lifelong friends. She had been married to her high school sweetheart, Johnny Storey for 52 years. Pam blessed him with three sons – Mathew, Jason and Josh. She also claimed a bonus son, Diamond Dean, who referred to her as his “Otter”. Her sons’ friends thought of her as their second Momma. She was a wonderful Nana to her five grandchildren – Logan, Elizabeth, Alex, Isaac and Isaiah. Her sisters – Deb Hammonds, Rebecca Green (Marc) and Sarah Lindsey (Don) adored her as did her nieces, nephews and great nieces and nephews. She was loved by her in-laws- Elaine (Ellis) Harrell, Wayne (Kay) Storey, James Ray (Gay) Murphy, Earl (LuAnn) Storey, Barbara Fundaburk, Catherine Murphy and Lucy Reaves. Pam was predeceased by her parents, Ray and Dot Reaves, her brother Billy and adopted brothers Frank and Jimmy Brimer along with in-laws- Donald and Dean Murphy, Vincent Storey and Jimmy Hammonds. She was a member of Iron City Baptist Church and was active in their Angel Ministry. Pam was a bright light on this earth that has been dimmed but will always shine brightly in the hearts of those who knew and loved her. A Celebration of her life will be held from 2-4 p.m. on Saturday, June 4, 2022, at Iron City Baptist Church.

The family of Sandra Louise "Pam" Reaves Storey created this Life Tributes page to make it easy to share your memories.

Sandra &quot;Pam&quot; Reaves Storey, 71, was called to her Heavenly home...