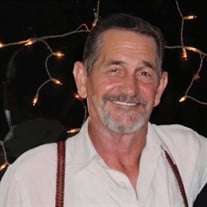 Ronald Keith Cantrell, age 65, resident of Pell City, AL, unexpectedly passed away peacefully in his sleep during the early hours of Tuesday, January 12, 2021. Known as both “Ronnie” and “Ron,” he was born June 24, 1955 in Hamilton, AL. Son of John W. Cantrell, Jr. and Ona V. Hood Cantrell. Ronnie was raised in Brewton, AL and a graduate of T.R. Miller High School in 1974. He was a member of the T.R. Miller High School football team Freshmen through his Senior year. His love for the sport never faded and was a loyal fan of the University of Alabama Crimson Tide. After graduating High School, Ronnie served a tour in the U.S. Army. He worked at T.R. Miller Mill Company in 1976 and attended the Walker County Coal Mine School in 1977. Thereafter, he worked for Teledyne Exploration of Oil & Gas Company from 1979-1985, worked in the trucking industry, Honda Lincoln Assembly Plant, finally as an Independent Contractor at the end of his career. During his downtime, Ronnie enjoyed fishing out on his boat, playing the guitar and mandolin. Ronnie will be remembered for his fun-loving attitude and generous spirit. He was always playful and joking with his children and grandbabies. Ronnie was always willing to lend a helpful hand to those in need people and animals alike. He was a dedicated husband, father, and caretaker for his stepson. He will forever be deeply missed by his friends and family. Ronnie is preceded in death by his father, John Wesley Cantrell, Jr. Ronnie is survived by his mother, Ona Vee Hood Cantrell, of Birmingham, AL, his wife, Tracy Smith Cantrell of Pell City, AL, daughter Kelly Cantrell Aguirre (Alejandro) of Atlanta, GA, son, David A. Cantrell (Tasha) of Enterprise, AL and stepson Jason C. Martin, of Pell City, AL. His granddaughters Emily Aguirre, Kaitlyn Cantrell, Marissa Aguirre, Carlee Cantrell and grandson, Gavin Aguirre. Sisters, Carol Cantrell Owens and Deborah Cantrell Bammerlin, of Birmingham, AL. A memorial service will be held at the Alabama National Cemetery, Montevallo, AL at a later date.

The family of Ronald Keith Cantrell created this Life Tributes page to make it easy to share your memories.

Send flowers to the Cantrell family.