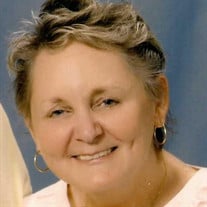 Penny Jane Betts, our beloved “Pen-Pen”, age 63 of Piedmont, AL went to be with the Lord on Saturday, March 20th, 2021. She was preceded in death by her parents George and Annette Cox of Anniston, AL. She is survived by her husband, Don Betts; two children, Katie Betts of Piedmont, and Jake (Selesta) Betts of Alexandria; one sister Toni (George) Vick of Anniston; and two grandchildren, Brynnan Betts and Jaylee Betts. Penny was born in Tennessee in 1957. The family moved to Kentucky and then Virginia while Penny was still a child. In 1965, the family moved to Kyoto, Japan when her father became a missionary. Two years later, they moved to Fukuoka, Japan where she attended school at Itazuke Air Force Base for 3 years. The family moved to Georgia in 1970 where Penny won a National Girl Scout contest which sent her to Wyoming for a summer. It was here that her life-long love for horses grew exponentially. In 1972 the family made their final move to Anniston, Alabama. After graduating at Anniston High School in 1975, Penny continued to pursue her love for horses. It was during this time that she met Don and they were married in 1982. Two short years later Katie was born and then Jake followed in 1987. Penny would continue to be involved in barrel racing and would go on to win several events throughout the years. During this time, Penny also worked at Jacksonville Hospital where she retired in 2008 after 29 years. After retiring, Penny still enjoyed working with horses as well as being a grandmother to her two grandbabies. Over the years, she attended church at Goshen United Methodist Church before joining The First United Methodist Church of Piedmont. Penny had a true servant’s heart and was always concerned with taking care of the needs of others. She was loving wife, wonderful mother and grandmother, loyal friend, and will be greatly missed by all who knew and loved her.

Penny Jane Betts, our beloved &#8220;Pen-Pen&#8221;, age 63 of Piedmont, AL went to be with the Lord on Saturday, March 20th, 2021. She was preceded in death by her parents George and Annette Cox of Anniston, AL. She is survived by her husband,... View Obituary & Service Information

The family of Penny Jane Betts created this Life Tributes page to make it easy to share your memories.

Send flowers to the Betts family.