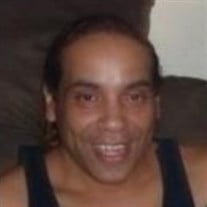 Mark Gonzalez of Alexandria died suddenly at home, Wednesday, April 20th. He was 55. He is survived by his wife of 13 years, five months and twelve days, Laura, their rescue critters and his father-in-law, Paul Golasz, Mark also leaves behind his adopted family, The Burns Clan and a host of friends. Within hours of his birth, Mark was removed from his mother's custody and placed in care. He spent his entire childhood in orphanages and foster care, where he encountered indifference, horrifying abuse and the occasional kindness. At a very young age, Mark realized if he was going to become anyone at all, he was going to have to fight for it, earn it by himself. His entry into the world of Food and Beverage came at the age of 11, when he started as a dishwasher in an Italian restaurant on weekends. Each successive position moved him closer to where he wanted to be: the kitchen. Mark wanted to cook. He may have been a child of the Bronx, but he understood Southern sensitivities: "Food is love.” Foster children age out of the system at 18; Mark aged out before completing his senior year. He quit school and went to work in various kitchens, hotels and a bike delivery service to support himself. He later sat for and earned his GED. On rainy days, the orphans were directed to read. "I worked my way through the encyclopedia. The J book was nowhere to be found. I always wondered what i missed." Mark continued his self-education through every day of his adult life; he was fascinated by the podcast, "Because Science" and mechanical engineering. Despite his upbringing, or maybe because of it, Mark became a good man, “a real mensch” as a friend liked to say about him. At the age of 20, Mark joined the Army; he was a Gulf War veteran. His role in-country as a supply specialist served him well in future chef positions. Mark developed a network of vendors, did his research and comparison pricing and always got the best deal for his food costs. The man could stretch a budget. Years of relying on no-one but himself honed Mark's awesome work ethic and deepened his dedication to the work he loved and his passion for service. He never asked anyone to do a job that he hadn't done himself, multiple times. If he asked a lot from those around him, he asked more of himself. Mark lived in Alabama for almost 30 years; his employment record shows long stints at Cheaha State Park (six years), NHC Assisted Living (ten years) and the last four years at Honda, working for AVI. Eighteen months ago, Mark was diagnosed with lung cancer accompanied by coGonzalezpd. He fought valiantly during those 18 months, through chemo, radiation, new meds, gene therapy, a myriad of of dr. appointments, tests, scans and surgery. If love and effort were all that was necessary for Mark to stay, then he’d be with us still. Behind Mark’s blunt truth Bronx persona was a kind and tender heart. He was loyal, funny, self-deprecating, sarcastic and he loved a good argument. Challenge him on a question of fact and he would whip out The Google and show you the error of your ways. The privileged few who witnessed his dolphin impression never forgot it. He played a wicked game of Scrabble, created on the spot rap songs while cooking always knew who would be unmasked on The Masked Singer and built magnificent bonfires. Mark may not have been as enthusiastic about gardening as Laura, but he enjoyed cooking up the harvest. Smoked bologna is now a specialty known in northeast Alabama, because he treated the owners of some of his smoked bologna samples. You may now buy it there. He loathed what he called "formulaic sayings," water chestnuts and the squirrels on the roof playing volleyball with magnolia pods. He loved his lady, his Dad, his critters and their life at 1144. Thirteen years, five months and twelve days. It wasn't enough and his passing breaks the hearts of those who knew and loved him. His name was Mark Gonzalez. “Do you not know that a man is not dead while his name is still spoken?” --Terry Pratchett Mark wished to be cremated. A memorial service is scheduled for Saturday, April 30, at The Classic on Noble, from 3-5 p.m. Y’all are welcome to join us in Speaking Mark’s Name.

Mark Gonzalez of Alexandria died suddenly at home, Wednesday, April 20th. He was 55. He is survived by his wife of 13 years, five months and twelve days, Laura, their rescue critters and his father-in-law, Paul Golasz, Mark also leaves... View Obituary & Service Information

The family of Mark Gonzalez created this Life Tributes page to make it easy to share your memories.

Send flowers to the Gonzalez family.