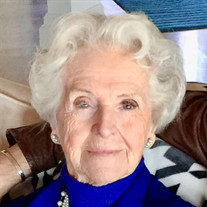 Joan Walmsley Etnire, mother, aunt, grandmother, great-grandmother, British war bride and proud American, died Oct. 31 at Regional Medical Center in Anniston, Ala. She was less than a month shy of her 98th birthday. Joan, who had lived in Anniston since 1972, was an inveterate volunteer, giving countless hours for decades to a variety of organizations. She was a devoted member of the Grace Episcopal Church community and volunteered for 44 years at the Regional Medical Center. Joan presided with wit and warmth over her extended family, scattered from Anniston to Kansas, Washington, D.C., North Carolina, Michigan, Illinois, California, Washington and beyond. Although she had lived in the United States since 1946, much of her chatty charm harkened back to her British upbringing. A messy room was a “tip,” she encouraged everyone to look at the bright side, and she always reminded people: “Never cry over anything that can’t cry over you.” Joan was born Nov. 25, 1923, in Thornton-Cleveleys, a small town in northern England near the Irish Sea. As a young woman, she told her father she planned to be a member of Parliament, but wanted to go to secretarial school first. The turning point in her life came in 1943, when, with World War II raging, she met Robert (Bob) Etnire, an American lieutenant based in England. She didn’t like him at first, she always said, because he held her too closely as they danced. Clearly, she changed her mind: They married the following year, just four months before her husband participated in D-Day. Their union that lasted more than 71 years, until Bob’s death in 2015, at the age of 96. In many ways, Joan’s life was as dramatic as the times in which she came of age. Perhaps the most daring chapter was when she boarded the U.S.S. Argentina — a ship filled with more than 300 “war brides” who had married U.S. servicemen — and left the United Kingdom for the first time. She landed in New York on Feb. 5, 1946, reuniting with Bob. With her was their eight-month-old son, Michael, whom Bob had never met. Joan had been named the “prettiest war bride” on the trip, and when Bob and Joan arrived home to Akron, Ohio, where Bob worked for Goodyear, Joan received the key to the city from the mayor. Parade magazine also was on the scene, chronicling her every step. “War Bride in Ohio” was the headline on the Parade story, which ran in newspapers nationwide. The family then began a series of moves, as Bob’s career took them from Akron to St. Louis; Marietta, Ohio; Monroe, Mich.; Kansas City; Huntington, Penn.; Atlanta, and finally to Anniston. Rather than complain about constantly uprooting, Joan told her children these moves were the next “great adventure.” Joan settled into a life focused on her family, her church, and her many volunteer activities. She played tennis into her 80s, loved to knit and garden, and was “Nana” to dozens of nieces, nephews, and young people who adopted her as a loving part of their families. Until the end of her life, Joan never lost one of her defining characteristics: She never met a stranger. Joan is survived by son Michael Etnire (Gayle) in Overland Park, Kan.; son Geoffrey Etnire (Susan Goldberg) in Washington, D.C.; daughter Pamela Fite (Arthur) in Anniston; by grandchildren Todd Dart, David Etnire, Kelly Etnire, Michelle Etnire, Freeman Fite, and Colin Etnire; and by 8 great-grandchildren. Services will be held at Grace Episcopal Church at 11 a.m. on Friday, Dec. 3. Donations in honor of Joan’s life may be made to Grace Episcopal Church, PO Box 1791, Anniston, AL 36202

Joan Walmsley Etnire, mother, aunt, grandmother, great-grandmother, British war bride and proud American, died Oct. 31 at Regional Medical Center in Anniston, Ala. She was less than a month shy of her 98th birthday. Joan, who had lived in... View Obituary & Service Information

The family of Joan Walmsley Etnire created this Life Tributes page to make it easy to share your memories.

Send flowers to the Etnire family.