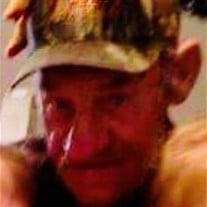 James Anthony Moreland (9/24/38 - 10/09/19) It is with great sadness that the family of James Anthony Moreland announces his passing on October 9, 2019 at the age of 81. James was the son of Willie and Tempi Onzell Moreland. He lived his entire life in Renfroe, Alabama. James worked as a carpenter most of his life and loved woodworking. He could make almost anything with his hands. When not at work, he was most often found in his shop creating something for his children or others. His children remember wooden go-carts and a playhouse the size of a storage building, complete with shingles and windows! He loved children and often made toys for nearby children. Phillip Jones recounts the story of how James surprised him and his brother on Christmas day. It was a tough time financially for his family that year and he recalls “an old Dodge pickup rolling into the yard, a brand new basketball goal and ball, and a man named James Moreland.” Mr. Jones stated that he tried to emulate that act of kindness in the years to come. James is survived by his children, Lisa Moreland Messier, Lori Moreland Fulbright, Joy Moreland, and Jamey Moreland; his grandchildren, Ashley Chamblee, Zach Vaughn, Shawn Ledbetter, Jon Ledbetter, Whitney Davis, Morgan Davis, Bradley Moreland, Katelyn Moreland, Brooklynn Moreland, Erynn Moreland, and Enoch Moreland; his great-grandchildren, Caine Chamblee, Sadie Chamblee, Rebecca Chamblee, Paisley Davis, Lincoln Wolf, Layla Pruitt , Ava Moreland, and Harmony Moreland; his sister, Mary Ann Dial; his nephew, Gary Moreland; and his lifetime friend, Terry Martin. The family wants to extend a special thanks to Terry Martin for his friendship with their father. He was always there for James whenever he needed anything, especially in recent years when his health was in decline. James was a caring, generous man and was like by many, although he would not have thought the latter. He had a humble disposition and never wanted to impose on anyone. Consider the verse in Psalm 25:9: He guides the humble in what is right and teaches them His way. James was greatly loved by his family and will be missed tremendously.In honor of his wishes, James will be cremated and the family will hold a private memorial.

The family of James Moreland created this Life Tributes page to make it easy to share your memories.

Send flowers to the Moreland family.