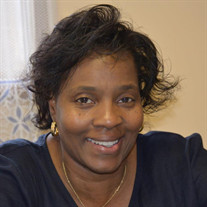 Jacques Elaine Coleman Moore passed away Saturday, March 28, 2020, following a protracted battle with breast and lung cancer. Elaine was at home surrounded by the love of her family. Elaine was born on January 11, 1965 in Anniston, AL to Otto and Delorise (Varner) Coleman. After graduating from Anniston High School in 1983 she began working as a deli associate at Winn Dixie. It was there that she met a Coca Cola delivery driver, Elbert Champ Moore, III who would later become her husband. Their courtship was somewhat surprising because when Champ gathered up the courage to ask for her number, Elaine responded by asking for his number instead and waited several weeks before giving him a call. Elaine and Champ married on June 7, 1987, and together they raised two sons, Sedale and Elliott. She went on to become the deli manager and had a long career as a culinary professional, most recently with RMC Health System. Elaine was known for her warmth, calming voice and easy smile, as well as her devotion to her family and friends. She had a true passion for baking cakes. Her cakes were not only delicious but also beautiful; you could taste the love with each bite. Elaine was a lifelong member of Bethel Baptist Church an avid supporter of the American Cancer Society’s Calhoun County Relay for Life. Elaine is survived by her husband and sons; her father, Otto; Stepmother, Philycia; grandchildren, Jordan, Skylar, Haddison, Alivia, Kobe, Kartier and Ja’von; her twin, Jacquelyn (Timothy) Flowers; sisters, Sandra (Jerry) Whatley and Shelia Carr; her little brother/nephew/practice child, Cedrick Coleman as well as a host of in-laws, aunts, uncles, nieces, nephews, and cousins. She is preceded in death by her mother Delorise, sister Cheryl and nephew Robbie. Elaine requested to be cremated and a memorial service celebrating her life will be scheduled at a later date. The family would especially like to thank Dr. Aasim Sehbai and the staff of Cancer Care Center of Anniston, Dr. Paul Klimo and the staff of Semmes Murphey Clinic of Memphis, the caring staff of SouthernCare New Beacon Hospice and all of the doctors, nurses and medical professionals who provided compassionate care. In Lieu of flowers, memorials may be made to Elaine’s Calhoun County Relay for Life Team (All In the Family) at https://secure.acsevents.org/site/STR/RelayForLife/RFLCY20SOR?team_id=2524679&pg=team&fr_id=97052

Jacques Elaine Coleman Moore passed away Saturday, March 28, 2020, following a protracted battle with breast and lung cancer. Elaine was at home surrounded by the love of her family. Elaine was born on January 11, 1965 in Anniston, AL to Otto... View Obituary & Service Information

The family of Jacques Elaine Moore created this Life Tributes page to make it easy to share your memories.

Send flowers to the Moore family.