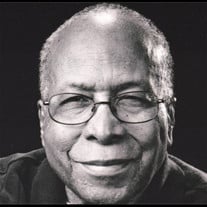 Mr. Hugh Carlyle Wilson was born in Port of Spain, Trinidad West Indies, to Reuben Euston Wilson and Elizabeth Theresa Wilson in 1943. He is the eldest of three children. During his childhood, Carlie, as he was affectionately known, spent his childhood learning and becoming well read and musically inclined. In his youth, he enjoyed playing soccer, reading, and playing the piano and organ. He attended school overseas in the United Kingdom (UK) while his parents worked various jobs as a traveling nurse and a teacher. He learned Latin while attending the Stanborough School and Rickmansworth School abroad in the UK. He often told stories about his travels across Europe through the train system visiting Spain, France, East Germany, and Italy. He attended the West Indies College in Mandeville, Jamaica and upon completion, he went to Trinidad to teach at the secondary school for over 20 years. During that time, he married his wife, Monica, and they were blessed with two children: Reuben and Rosalie. While living in La Brea, Trinidad, he was a first Elder at the La Brea Seventh-day Adventist Church, and the family was heavily involved in church activities including: witnessing to the local communities, often providing home cooked food, sharing mangoes from the tree growing in the backyard, as well as offering prayer and an invitation to worship. Additionally, he was a founding member of the Pathfinder Club. At church, he was often called up to preach, teach Sabbath School, and minister to the congregation in many ways, including directing the children’s choir and serving as minister of music. Several times he and his wife welcomed individuals to stay in their home as support to young people in need. He befriended everyone in the neighborhood and was there to provide counsel or conversation. He loved learning about people’s historical background and loved doing research. Very family oriented, Carlie would often plan family trips to Point Fortin, Port of Spain, the nearby beaches, and the Pitch Lake. In 1982, when his father passed, acting on faith, he moved his family to the United States, specifically, Huntsville, Alabama in the United States. Although it was a culture shock for him and the entire family, he dove headfirst into academics at Oakwood College, now Oakwood University, and was involved in any Caribbean club or activity that Oakwood College had to offer. While at Oakwood, he participated in several student work activities to provide for his family. In 1985, he graduated from Oakwood College with a double major in Accounting and Business Administration. That same year, God blessed the family with their youngest daughter, Adana. Finally, his nephew, Curt King, through his wife came from Trinidad to live in the US and was welcomed to the family. He cared for him to the best of his ability and took care of four children as they matriculated through the Adventist education system. Carlie greatly enjoyed working at the Oakwood University Bookstore, where every student would eventually interact with him as they needed to stop there to get their books for classes. In becoming acclimated to the US, he took his family on many Sabbath afternoon drives and trips to different parts of the country to visit the local churches and to discover and learn about the environment. He still enjoyed his music and became a valued member of the Singing Men and Ambience music ensemble. He also spent several years producing and directing the radio show segment called, “Caribbean Caravan” which aired on WJOU (formerly WOCG) on Sunday afternoons. Caribbean Caravan featured music, facts, and news from the West Indies. Carlie was sociable and loved to have conversations with anyone. He was kind and knowledgeable overall. Later in life, his career focused on his accounting degree and he provided tax services for H&R Block as a CPA, and often showed his generosity by providing free services to those who were in need of tax assistance. Moreover, his favorite pastimes were collecting and listening to music, reading historical accounts (especially West Indian history), Christian works from several authors, SciFi, thrillers, and teaching Caribbean history and Biblical theology to grade school students. Hugh Wilson is most proud of his knowledge of the Bible and the accomplishments of his children and family. Hugh leaves his legacy to his children: Reuben (Cynthia), Rosalie (Uganda), Adana, and Curt (Shemeaka); grandchildren (Monique, Jalen, Jason, William, Ebonie, and Devin); his brother James (Paula) and sister Joy (Lucius), niece Dana (Vance) and nephews Sean, and Justin (Shelana); and a host of great nieces and nephews. Hugh C. Wilson proved and found the Lord to be true to him all along his life’s journey. He lived in the sweetness of trusting in Jesus, taking Him at His Word, and resting upon His promises. God was there for Hugh until the moment he took his last breath on Saturday, March 5, 2022.

Mr. Hugh Carlyle Wilson was born in Port of Spain, Trinidad West Indies, to Reuben Euston Wilson and Elizabeth Theresa Wilson in 1943. He is the eldest of three children. During his childhood, Carlie, as he was affectionately known, spent his... View Obituary & Service Information

The family of Hugh Carlyle Wilson created this Life Tributes page to make it easy to share your memories.

Send flowers to the Wilson family.