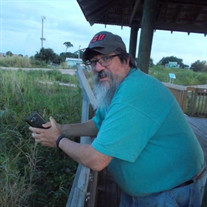 Dr. George R. Cline, 64, of Jacksonville, passed away Thursday, February 10, 2022, at RMC Anniston after complications from an infection. George’s legacy, though, is not in how he died, but in how he lived, and anyone who knew him will say that he lived a life full of joy, song, excitement, and—of course—frogs. George was born and raised in Derry, PA, and attended Derry Area Senior High School (1975) and Indiana University of Pennsylvania (1979). Starting in 1982, George studied at Oklahoma State University, earning his PhD in Zoology in 1990. From 1990-1992, he served on the Biology Department faculty at Kutztown University in Kutztown, PA. Beginning in Fall 1992, George served as a professor of biology at Jacksonville State University, where he taught thousands of students and earned the moniker “Dr. Frog” for his work. George married Brenda Smith Cline in 1981, and the couple have two children: Katie, an English instructor at Kansas State University (born 1996) and Eric, a biology graduate student at the University of Alabama in Huntsville (born 1998). Throughout his children’s lives, George wore many hats: t-ball and soccer coach, Boy Scout and Girl Scout leader, Science Olympiad coach, VBS volunteer, marching band dad, and high school theatre aficionado. And his family extended even further: 2 older sisters and 2 older brothers and their spouses, nieces and nephews and their children, lifelong friends, and the students and colleagues who became family. George’s life was rich and layered, and he was passionate about many things. From choir and musical theatre in high school to singing in the chancel choir at the First United Methodist Church of Jacksonville to giving his children a healthy appreciation for Jimmy Buffett and John Denver, George loved music. But he was also an athlete, setting school records for cross-country during high school and playing rec league softball in college. In his position as a biology professor, he worked with the Dauphin Island Sea Lab as a committee member, summer instructor, and university liaison for almost 3 decades; was a sought-after advisor for undergraduate and graduate students; and a beloved friend to his colleagues, bringing laughter and community to the department. Services will be held at 2PM Saturday, February 19, 2022, at the First United Methodist Church of Jacksonville with a visitation beginning at 12PM. In lieu of flowers, the family asks that you donate to your local wildlife education organization, state park, or natural history museum. The Dauphin Island Sea Lab will be establishing a memorial scholarship for a JSU student in George’s honor. Please visit the link and indicate “George Cline scholarship” in the comments: http://weblink.donorperfect.com/DPOFormforsglorrecurring

Dr. George R. Cline, 64, of Jacksonville, passed away Thursday, February 10, 2022, at RMC Anniston after complications from an infection. George&#8217;s legacy, though, is not in how he died, but in how he lived, and anyone who knew him will... View Obituary & Service Information

The family of Dr. George R Cline created this Life Tributes page to make it easy to share your memories.

Send flowers to the Cline family.