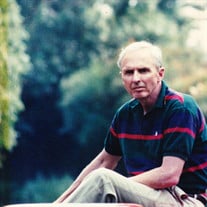 George Alexander Carruth, Colonel - US Army (retired) - Beloved Brother, Husband, Father, Patriot passed October 10, 2020. George died surrounded by his wife of 56 years, Anne, his son Stephen, and daughter Shelley Stokes. George is also survived by, deeply loved, and greatly missed by-Evelyn Carruth Kerpel (Sister), Paul Sanderson Carruth (Brother), Elizabeth Kerrigan & Alexander Carruth Stokes (Grandchildren), Russel Eugene Stokes (Son-in-Law), and Karen Anne Zanghi (Daughter-in-Law). Born September 6, 1935 in Camden, Arkansas into a rural farming family. George was a precocious child and excellent student. He enrolled at the University of Arkansas in 1953, graduating four years later with a bachelor’s degree with high honors and master’s degree as a National Science Foundation Fellow. He would later earn a PhD in micro biology from Tulane University. Commissioned a second lieutenant in the Army in 1957, he retired 1987, earning the rank of Colonel. George began his career planning for the use of chemical, biological and nuclear weapons in war and ended planning for their elimination in peace. In those 30 years he had many interesting assignments, including a tour of duty in Vietnam 1970. He enjoyed many of his assignments and always thought the Army was very good to him. Among his favorites was his assignment as an instructor and Executive Officer at the US Army Infantry School Florida Ranger Camp, a tour as the American Exchange Officer with the British Defence Nuclear Biological Chemical School in Winterbourne Gunner, UK. A notable highlight of his career was his time serving as commander of Dugway Proving Grounds in Utah, where he led the effort to modernize the test and evaluation facilities and secured millions of dollars to improve family housing. He also really enjoyed his numerous assignments to the Army’s General Staff at the Pentagon. His wife Anne joked that he was the only person she knew that actually enjoyed working in the Pentagon Among his awards and decorations, the ones he was the proudest of was the Vietnam Service Medal, the Bronze Star and the Legion of Merit with two Oak Leaf Clusters and, of course, his Ranger Tab and Airborne wings. George met Anne Stephens at Ft McClellan, Alabama in 1963 and married her in 1964. They traveled the world together, raised two children and were married for 56 years After working in private industry for another 12 years they retired to Anne’s family farm in 1999 where he became known for his ever-growing vegetable garden that somehow produced year-round and was well-loved for how he generously shared its gifts. George was active in the local community, joining the Anniston Noon Rotary Club and serving on the governing board and one year as President. He was an active member the First Methodist Church of Anniston where he served on the Board of Stewards and was a member of the so called “fixing colonels” keeping the church buildings functional and in good condition. He was also a member of the Anvil Society of the Community Foundation of Northeast Alabama. From small child through his career in the Army and the private sector, George was always known for his tenacious ability to leave things better than he found them. It was this tenacity to make the world a better place, paired with his unwavering love of family and life made him an exemplary example of man among men. Upon his departure for his greatest journey yet, we celebrate his life and mourn our loss in equal measure with his memory left to warm in our hearts. Memorial services are being planned and will be announced by the family. In his memory the family asks that contributions be made to organizations aiding Disabled Veterans or the Longleaf Fund at the Community Foundation of Northeast Alabama.

The family of George Alexander Carruth created this Life Tributes page to make it easy to share your memories.

Send flowers to the Carruth family.