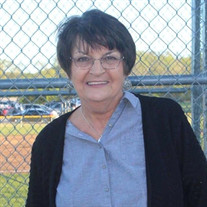 Cynthia “Cindy” Davis Jaggers, 66, passed away April 25, 2020, surrounded by her loving family in her home. Cindy is preceded in death by Frank and Juanita Davis, Ernie Hutchens, Herman Sr. and Willie Jaggers, Bobby Jaggers, Jonathan Jaggers, and Will Patterson. Cindy was born on August 13, 1953, in Gadsden, AL, to Frank and Juanita Davis. She was a born again Christian and knew that Jesus was King. Cindy graduated from Gadsden High School, Class of 1971. Cindy’s greatest desire was to become a wife and mother. She married the love of her life, Hacky Jaggers, December 26, 1976, and became a mother to Michael and Michelle. Cindy bled orange and blue, and she loved cheering on the Auburn Tigers! Cindy served for many years at North Glencoe Baptist Church with the nursery, youth, and hosting many showers and weddings. Cindy took pride in being a mother and gave everything she had to raise her children and always welcomed their friends in her home with open arms. Cindy’s greatest joy was her grandchildren, Avareece, Bryce, and Beckett. Cindy loved being a “Mimi” and spending her time watching Avareece dance, Bryce and Beckett playing baseball, and cooking pancakes for breakfast whenever they spent the night. Cindy’s legacy is her gift of unconditional love and service to others. She is survived by her husband: Hacky Jaggers; Children and grandchildren: Michael and Jenni, Avareece, Bryce, and Beckett Jaggers, and Michelle Jaggers; Siblings: Pat Hutchens, Tim (Beverly) Davis, Jeff (Dottie) Davis, and Omar Davis; Siblings in love: Herman (Ann) Jaggers Jr., Connie Jaggers, and Judy (Danny) Coffey; Best friend: Sandra (Steve) Patterson, and a host of nieces and nephews. The family would like to give a special thanks to Cassie and Jason Blocker and Connie Jaggers for their infinite love and support over the last two years. Also, to Encompass Health: Tiffany, Cece, Kylie, Jinelle, Elizabeth, and Brigette for their selfless act of service. Graveside services and memorial will be at a later date officiated by Robby Davis.

The family of Cynthia Davis Jaggers created this Life Tributes page to make it easy to share your memories.

Send flowers to the Jaggers family.