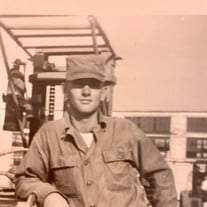 Billy Paul Burt, age 88 of Oxford, passed away on September 13, 2021, in his home. Bill was born to parents Delma Pate and Foster Burt on November 6, 1932, in Delta, AL, and had 6 brothers and 3 sisters. The family later settled in Oxford, where he met his wife Doris whom he married in 1952. Soon after, Bill was drafted and honorably served his country during the Korean War, and after the completion of his military service, they moved back to Oxford, where their son Danny was born in 1957. After his time as a soldier, Bill continued to work for the U.S. Army as a civilian employee for many years at both the Anniston Army Depot and Fort McClellan. Bill also served his community as a fireman and was a member of the Oxford Volunteer Fire Department before joining the Fort McClellan Fire Department, where he served as Fire Chief. After retirement, Bill had no intention of slowing down, and instead dedicated his time to financing and building homes for several families. He was a farmer, and spent countless hours tending to his crops, land, and livestock. He was also an avid outdoorsman and enjoyed fishing and hunting. Bill and his wife were active participants in the Senior Citizen Olympics, and Bill enjoyed spending time with his fellow seniors playing sports like volleyball, softball, checkers, and horseshoes. Bill and his wife Doris were married for 68 years before she passed away last year. Bill was a hardworking, strong, and generous patriarch who is survived by his son Danny, his daughter-in-law Yondie, two granddaughters, two great-granddaughters, and a host of loving friends and family. A memorial service will be held on Friday September 17, 2021, at 2:00pm at Oxford Lake Pavilion 8. In lieu of flowers please consider a donation to your favorite charity on Bill’s behalf.

Billy Paul Burt, age 88 of Oxford, passed away on September 13, 2021, in his home. Bill was born to parents Delma Pate and Foster Burt on November 6, 1932, in Delta, AL, and had 6 brothers and 3 sisters. The family later settled in Oxford, where... View Obituary & Service Information

The family of Billy Paul Burt created this Life Tributes page to make it easy to share your memories.

Send flowers to the Burt family.