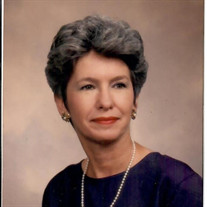 A memorial service will be held for Barbara H. Walters on February 12th.at Eulaton Methodist Church at 1:00 p.m. with the Rev. Sheree Elliott officiating. Mrs. Walters, 80 passed away on February 1st in Anniston, AL Barbara is survived by her husband of 59 years, Donald Walters, brothers, Jerry Hosey (Martha) and Tony Hosey (Ann Marie), nieces, Robin Hosey, Jo Beth (Kris), Leesa Marie (Thomas) and nephews Ricky McDaniel and Stephen Hosey (Melanie), great nieces and nephews, godsons Whit, Reid and Evan Wilkins (sons of Sherry and the late Bobby Wilkins) and many friends. She is preceded in death by her parents, Lonnie J. and Jewel Hosey. Barbara Walters was the "real" Barbara Walters! She was a loving wife, daughter, sister, aunt, cousin and friend to many. She and her husband were originally from Laurel, MS and settled in Anniston in 1964. Barbara was employed by several businesses in the area: Lee Brass, Northeast Regional Medical Center, the Calhoun County Chamber of Commerce, SouthTrust Bank and in her "retirement" went to work for F& M Bank. Barbara was the consummate hostess always thinking about others' needs. .She took care of many people during her life and looked out for many that might not have anyone else to look out for them. She was the best of friends and leaves many friends to cherish her memory. Besides having a famous name, Barbara was a well-known figure in Calhoun County. Her community involvement included Junior Achievement, tutoring at Wellborn Elementary School, and she was a poll worker for many years. She was a graduate of Leadership Calhoun County Class of 1986. She served on numerous Boards to include: The Anniston Museum of Natural History (League), the Calhoun County YMCA in which she was honored as a Lifetime Board Member, the Highland Health Services Board, the Calhoun County Library - Friends of the Library. She was involved with the Cottaquila Council of Girl Scouts for many years and served as President from 1992- 1998. Barbara was recognized in 1995 for her volunteer work with Concern for Children. She was an active member of the Education Committee of the Calhoun County Chamber of Commerce. At SouthTrust Bank Barbara managed the bank's cafeteria, planned all receptions including flowers, food and seasonal decorations. Many elderly customers can be vulnerable to fraud and Barbara helped many manage their finances. She also served as the liaison between Anniston High School and SouthTrust Bank through the Chamber's Adopt-a-School program. For many years you could see Barbara organizing and working in the concession stantl at the United Cerebral Palsy Center Telethon. She was named volunteer of the year in 1996 and was Co-Chair of the Telethon that year. Barbara was also recognized as the Business·Person of the Year by the Future Business Leaders of America. Her work at F&M Bank involved planning trips for seniors which she averaged at'least four trips a year and she did this for approximately 10 years. When the tornado hit the Williams community in 2011 Barbara and her husband, Don, volunteered many days helping the victims of the community recover. Barbara was an avid runner and ran in many 5k and 1Ok races and was a charter member of the Anniston Runners club. Besides serving as a Board member, Barbara liked to use the equipment and attend Yoga classes at the YMCA. After being diagnosed with Parkinson's disease, Barbara & Don formed the Calhoun County Parkinson's Support Group and was instrumental in bringing Rock Steady Boxing (which is an exercise class geared to those with Parkinson's) to the YMCA. In 1985 Barbara became the American mother to Tomas Finn, an exchange student from Sparrhome, Sweden. Tomas graduated from Wellborn High School, living with Barbara and Don for a year. Tomas has for many years made trips to see his American mom. Barbara's other involvements include: Altrusa Club, Women's Executive Network, Salvation Army Women's Executive Board, Relay for Life and her almost 24 years of reading and socializing with her Carpe Librum Book Club, which Don affectionately named the "Brotherhood of Sisters". Barbara was also involved with the Kiwanis Club of Calhoun County. For many years Barbara and Don worked the pancake breakfast which was the Club's main fundraiser for purchasing clothes and shoes along with school supplies for children. You would find the two from :00 a.m. until the kitchen was cleaned at the end of the day. She was very active in United Methodist Women. Barbara was a woman of many accomplishments. She enjoyed volunteering and caring for others and was very passionate about her community. She never wanted recognition; she just enjoyed sharing her time and talent with others. She will be greatly missed! In lieu of flowers, donations may be made to the YMCA of Calhoun County 29 W. 14th St. Anniston, AL 36201 or St. Jude Children's Research Hospital PO Box 50 Memphis, TN 38101-9929. We respectfully request that attendees wear masks at her memorial.

A memorial service will be held for Barbara H. Walters on February 12th.at Eulaton Methodist Church at 1:00 p.m. with the Rev. Sheree Elliott officiating. Mrs. Walters, 80 passed away on February 1st in Anniston, AL Barbara is survived by her... View Obituary & Service Information

The family of Barbara H Walters created this Life Tributes page to make it easy to share your memories.

A memorial service will be held for Barbara H. Walters on February...

Send flowers to the Walters family.