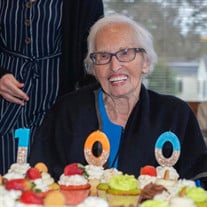 After living a full century, Anne Griffin Newman, 100, passed away under the Christmas star December 21, 2020 in Sylacauga, Alabama. On her 100th birthday this year, she celebrated with many family and friends, was honored by her church and even received a Mayor’s Proclamation from the City of Sylacauga. Over 150 greeting cards were sent and she had spent many days in 2020 re-reading them. She would often say “We got that party in just in time!” Anne was born February 23, 1920 in Birmingham, Alabama to Joseph and Flora Griffin. She was the youngest of 3 children and enjoyed sports, science and listening to the Hit Parade on the family’s radio. She graduated from Ensley High in 1936 and enrolled at Alabama Polytechnical Institute (now Auburn University) to major in Home Economics. She and her siblings, Joe and Sara, were all API students and helped their mother run a boarding house in Auburn. There she met and married Dewitt Yost. In 1938, they moved to Ohio where their two children, Karen and Eric were born. They divorced in 1952 and Anne and her children moved to Sylacauga where her parents had lived for over decade. She commuted to Wheeler Business College in Birmingham, earned a secretarial degree and began working for a few businesses. She married Claude Newman in 1954 and together they ran the White Midget Restaurant. This was THE place for all of the local teenagers to meet in the 1950’s and where her pies and cakes first became legendary. Her third child, Emily, was born and over the next several decades Anne - with her parents and children - became a huge part of the fabric of the city. In addition to catering dinners and special events, Anne owned and operated the boarding house, Oaklawn Inn, until it closed its doors in 1980. People from all over the area would reserve a spot at the long dining tables for the family style dinners served there. Southern fried chicken and Neola’s fresh buttered rolls were favorites. In addition to being a locally famous chef and baker, Anne was a master bridge player. She was a member of a few bridge clubs for the majority of her adult life. A good competitive card or domino game was a great joy for her and if you were her partner you had best be “in it to win it”. At 100, her mind was still sharp enough to play but her arthritic hands could no longer hold the cards. In recent years, she has enjoyed visits from family and friends, cheering for the Auburn Tigers, ice cream and sitting outside with the ladies from “the hood” when the weather was warm. She was able to live independently in her own home until the end with the help of angels-on-earth: Fran Oden and Ethel Stamps, her daughter Emily and her sister-in-law Polly who lived next door. Anne is predeceased by Joe Griffin (brother), Sara Griffin Marston (sister) and Eric Yost (son). She is survived by Karen Yost Heimel (daughter) and her husband George; Emily Newman Straussberger (daughter) and her husband John; and Polly Gilliland Griffin (sister-in-law). Her six grandchildren and four great-grandchildren, who knew her as “Mama Anne”, join scores of others who also loved her very much. She will be remembered for her incredible strength, resilience, devotion, faith, character, intelligence and hearty laugh. This was her recipe for life. Anne had been a member of the First Baptist Church in Sylacauga since 1950. It was a rock in her life and she derived much of her strength from lifelong Sunday school classes and services there. The family requests that remembrances be made in the form of contributions to her beloved church. The family would also like to express its sincere gratitude to the doctors and nurses in the COVID ward of Coosa Valley Medical Center for their heroic efforts every day and for shouldering the unimaginably difficult task of helping family say goodbye when they can’t be there.

After living a full century, Anne Griffin Newman, 100, passed away under the Christmas star December 21, 2020 in Sylacauga, Alabama. On her 100th birthday this year, she celebrated with many family and friends, was honored by her church and... View Obituary & Service Information

The family of Anne Griffin Newman created this Life Tributes page to make it easy to share your memories.

Send flowers to the Newman family.