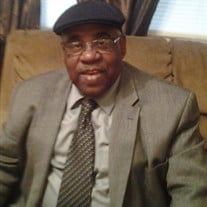 Alvin Townsend passed away on Thursday, March 12, 2020 after reaching the age of 73. After battling cancer, he died peacefully at home in Anniston Alabama with his beloved wife Maniela “Ellie” Townsend and his daughter, Tracy Townsend by his side. Alvin was born July 28, 1946 in Millerville, Alabama to Perry and Clara Townsend. He was born and raised in Millerville, AL and graduated from Lineville, Alabama’s Clay County Training School in 1965. In 1967, Alvin, wife and child moved to Houston, TX. Around 1974, family moved back to Alabama to help start a congregation in Ashland, AL; and around 1983, he moved his family of six back to Houston, TX. In 2003, Alvin moved back to Millerville, AL to take care of his mother until she passed 2010. He married Ellie Hunter on March 15, 2008. He developed strong friendships loved all of the brothers with members of the Kingdom Hall. Alvin loved both fresh and saltwater fishing and shared his passion of the sport with his family and friends. In his later years, his passion for fishing was shared with his best friend Mack Freeman and Vic Freeman. But his relation with his best friend, Dan Gregerson and Fred Stoudemire was also special because of their time in the ministry. The bond with the four men was very strong. When he talked to his children, he would talk about the four men; in fact, he would make sure that he would take one of his kids to visit Dan Gregerson when they came to visit him. He is survived by his loving wife, Maniela “Ellie” Townsend of Anniston AL; his daughter, Tracy Townsend of Houston, TX; two sons Alvin L Townsend of Webster, TX and Timothy Townsend of Tempe, AZ; and his stepsons, Traver Hunter of Anniston, AL and Richard Hunter of Enterprise, AL; grandchildren: Nicholas Townsend, Garett Townsend, Dara Townsend, Gabrielle Townsend and Chelse Smith; step grandchildren, Makayla Hunter, Aviana Hunter, Tara Hunter, Ariana Hunter and L.J. Hunter; two great grandchildren, Leila Sky Nichols and Remi Kai Townsend; two brothers, Paul and David Townsend of Sylacauga, AL; a sister, Minnie-Ethyl Adair; a host of nieces, nephews, relatives, and beloved extended family members. He was proceeded in death by his first wife, Emma Lee Townsend of Katy TX; his son, Alan Townsend of Tempe AZ; his grandson, Trenton Townsend of Katy, TX; mother, Clara Townsend; father, Perry Townsend; two brothers Gerry and Leonard Townsend. Psalm 91:15 He will call on me, and I will answer him. I will be with him in distress. I will rescue him and glorify him. James 4:14 Whereas you do not know what your life will be like tomorrow. For you are a mist that appears for a little while and then disappears

Alvin Townsend passed away on Thursday, March 12, 2020 after reaching the age of 73. After battling cancer, he died peacefully at home in Anniston Alabama with his beloved wife Maniela &#8220;Ellie&#8221; Townsend and his daughter, Tracy Townsend... View Obituary & Service Information

The family of Alvin Townsend created this Life Tributes page to make it easy to share your memories.

Send flowers to the Townsend family.